Let’s face the fact that no one in the current modern Congress is gonna do squat about gun laws.

Correction: No one at the current State and Federal level is gonna do squat.

Sure it sounds “productive” that a bunch of Senators are gonna gather and talk, but any agreement will be left on the table because no one wants to fight with the Party Base and Special Interests with the possibility of losing campaign funding.

So instead it’s become the time honored tradition of laying out excuses as to why so much evil is able to obtain a firearm.

Decades ago, the public was told Rock Music was leading the degenerates of the US, then it was Heavy Metal lyrics, oh and let’s not forget how Rap Music was turning everyone into thugs only to be followed by what was being shown on television as the Huxtables were replaced by the Bundys.

(Are you seeing a pattern?)

Yes, music and television is/was destroying Western Civilization only to be replaced by lack of religion on public schools to the uptick in divorced families or two income family homes and the list now evolves to dangerous video games and “loner” mentality as kids talk more online then fac-to-face.

But barely anyone will link the current string of shootings to the easy access of guns.

STOP before you even say the “Car Analogy” just think how dumb that statement is first.

Oh sure folks like Lauren Boebert have stated “we didn’t ban planes after 9/11” to which I can only say she’s an idiot. Because look what happened after 9/11, extreme measures were taken so folks couldn’t bring knives and other sharp objects on board with them along w/limit sized toiletries.

And at least a few times a day, there’s someone getting busted for attempting to bring their handgun on flight with them using the excuse “I forgot it was in my bag” Um, you packed your bag, you didn’t forget. 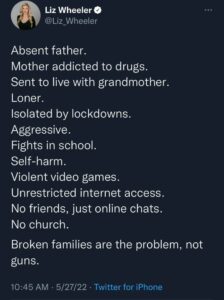 But if you look at the list by Liz Wheeler it’s pretty much an updated version of “6 degrees of a psychopath.” Let’s see, I have a 16 yr old child so let’s play, he is a match for; Isolated by lockdowns (even though lockdowns ended awhile ago), unrestricted internet access, No Church (holy shit! I’m almost scared), using online chats, plays violent video games…. OH MY GOD I’M LIVING W/A FUTURE PSYCHOPATH!!

My child is also on the Spectrum which is a link Wheeler forgot because you gotta have that after Sandy Hook. Remember how everyone became an “expert” on Autism after that?

Ya know the only thing missing from this list is a link to that person being a Liberal, because someone is always able to link a mass shooter to some sort of voting record.

But let’s come back to reality about my child; his schooling is hybrid (part in school/part online), he limits himself on video game play, he understands the dangers of guns, and he listens to his mother more then dad.

Look I’m not an expert on guns and gun laws, but:

Have I fired a gun = Yes

So let’s figure out another excuse as to why so many school shootings are happening and the best is also even dumber then the rest. Simply a school has too many paths of entry.

That one came way of Canadian-Cancun Rafeal Edward “Ted” Cruz.

Oh Rafeal, you were also a big proponent of arming teachers in the past and even though teachers are allowed to be armed on site that didn’t help did it?

So what’s the next excuse to be for the next school shooting? In 15 years is the excuse gonna be because the child lacked baby formula during the shortage of 2022 or because there are too many streaming online services for kids to tune into.

Well you don’t want kids watching Sesame Street because it became woke and can’t blame school libraries since so many books are being banned, so honestly what’s the next excuse gonna be?

Somewhere someone has an updated list on a white board just waiting to be read.

Oh and one last thing- Fuck the NRA and Wayne Lapierre

I’m waiting for the cancel nation to begin against all these celebs that are stepping up for gun control. No not the Liberals, I’m talking about those Conservative Celebrity darlings, what’s the backlash gonna be?

I’ll bet nothing with many stating “ya know there’s freedom of speech in this country…” all the while having keyboard bravery on social media thrashing against a Liberal Celeb.

OK that’s it for my incoherent thought.

Slap the tap, pass the peanut bowl and pay your political tab

Opinion | There’s something more dangerous than the ‘Big Lie’ (MSN)

© 2016 Web Design By Drift2 Web Service
wpDiscuz
0
0
Would love your thoughts, please comment.x
()
x
| Reply
MORE STORIES
Todds Posts
Politically Brewed - October 5, 2016 0
I give Pence kudos... He acted more presidential then his running mate.. He knew how to absorb attacks, dust off and go back into...
Skip to content