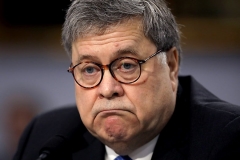 Attorney General William P. Barr said that most of the “mainstream media” are “a collection of liars” who are “political actors” pursuing a specific political agenda. He added this is “very destructive to our Republic.”

Barr made his remarks in an exclusive interview with Townhall.com, which Editor Katie Pavlich reported on Sept. 11, 2020.

“A perfect example of that were the riots,” he said. “Right on the street it was clear as day what was going on — anyone observing it, reporters observing it — it could not have escaped their attention that this was orchestrated violence by a hardened group of street fighting radicals.”

Russia ‘Very Active’ In Influencing 2020 US Elections To ‘Denigrate’ Biden,...

‘Hillbilly Brigade’ Takes Matters Into Their Own Hands Amid Ore. Wildfires...