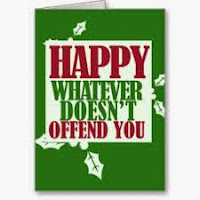 As the Thanksgiving holiday approaches, I have to admit I loathe this time of year. No, not because of family traveling from afar or all day football or even Thanksgiving itself, nope I loathe the day after.

Ha, you probably thought I was talking about “Black Friday,” but that has little to do with it.

Nope, I loathe this time of year because it begins the “War on Christmas” brouhaha in the Media.

“Don’t say Happy Holidays it’s Merry Christmas” is the mantra spread in memes on social media in never ending posts. TV Journalists thump their desks against guests that oppose saying anything “Christmas” in message while throwing hi-fives and gulping down eggnog with those that shout repeated Amens.

It’s an all about “me” society and all must conform to whether or not what I say. Did you catch that, I said “whether or not” because not only is this so-called “War” about keeping the word “Christmas” in the fold but it’s also a “War” to keep it away. But the major issue is that many of us have been programmed with something called mannerism and feel obliged to always give greetings and salutations to whomever we speak to.

But there are a few ways to end this “War,” it’s very obvious and easy to begin; name tags and religious segregation.

Maybe people should start wearing name tags during the month of December that states their religious preference. “Hello I’m Jewish” or “Yes I’m Atheist” should become the norm so no one gets offended because then everyone knows the correct greeting!

Or maybe Wal-Mart should segregate checkout lines. Aisles 1-10 for Christians, 11-21 for Jews, 22-30 for Muslims, and what’s left for everyone else. Of course we already know the obvious flaw with this. No, not the division of segregated checkouts lines but that it doesn’t matter what time of day it is, Wal-Mart only has 6 out of 30 checkout aisles open at one time!

This all leads to another issue that pops up during the “25 Day War on Christmas” ratings grab in Media; Religion in Public schools.

I don’t have any issue with kids getting together during their free/study halls or lunch to discuss their religious belief among themselves, as long as it stays there. Too me, they are not bothering anyone or causing a disturbance.

However, if you want your child to learn or participate in religious rituals or education, then send them to the proper religious educational setting as a public school setting is not appropriate. But many cannot afford the expense of religious schools, so off to public schools they go and the parents try to transform that school towards their way, because who cares what other religions of children there are, it’s about my child and that’s what matters.

I’ve always believed that during the month of December, in Civics or History class, it would be interesting to educate students on the different types of religion and what/if they celebrate a holiday around this time. Well as I’ve grown older I realize what a crazy idea that was because the word “INDOCTRINATION” screams from the rafters.

Which leads me to the state of Maryland where a story of the Maryland father who is currently banned from his daughter’s high school because he objected the teaching of Islam in her World History class.

Mr. Kevin Wood was upset about an essay assignment on Mohammed, Mecca and the 5 Pillars that was assigned to his daughter. Mr. Woods stated that “our kids can’t study Christianity in public schools but we can force feed our kids Islam” and requested his daughter be removed from the La Plata High School class while Islam was topic. The school administration denied the request because it is a requirement towards graduation.

Complete the course or fail.

Mr. Wood was then served with a “No Trespass” notification for language that constituted a want to disrupt school activities. Yet most of the Media ended the story with the “No Trespass” as dramatic pause and with the La Plata HS kids being forced to learn (and possible sympathetic towards) Islam. If one actually researched a little further they might have found out that in this World History course not only touched on Islam when learning about the Middle East, but also Hinduism & Buddhism when the subject changes to India and China as well as Christianity during the Renaissance Era.

Not to also mentioned is that Mr. Wood’s daughter would spend the rest of the World History course in the Library while the topic of the Middle East is taught and still fulfilling her requirement of writing the essay.

Now there must be something in the Maryland drinking water as another school district made the news concerning religion and the public school system that had Social Media posts exploding with rage.

The other week, the Muslim community requested that the Montgomery County school district recognize their religious observance on the school calendar along with the current religious observance of other religions. They weren’t asking for a day/week off, just recognition on the calendar. So instead of recognizing their religion, the school board instead decided to lump everyone together into one big “Winter Break and Spring Break.” Yes all Jewish, Christian, and Atheists will now be joined on “Winter Break and Spring Break” with the Muslim student population.

Of course outrage ensued, because everyone knows Christmas break is for Christians only! Right?

Let me get this correct, no one lost any days off for the “break” but the outrage is over sharing the holiday break with Muslims and a name change from “Christmas” to “Winter” and “Easter” to “Spring?” Holy Bejesus, where’s the nearest protest/boycott of the Montgomery County school district?! What there wasn’t one?

What’s funny is that this past summer, parents and students in the Montgomery County school district did lead a protest against the School Board’s decision. But that was a decision to change the start of the school day from 7:25am to 8:15am.

But let’s look where the real “War on Christmas” should be laid, Capitalism.

Why not blame Coca-Cola for pushing Santa Claus in advertising back in 1931 along with Macy’s?

How many people, regardless of religion, take part in all those awesome Christmas sales throughout the month? Because last time I checked, Joseph wasn’t working at the Bethlehem Manger Donkey Emporium pushing low mileage/low interest rates with balloons and a hot dog machine that faithful night in December!

No the “War on Christmas” is fought in the Mall corridors. It doesn’t matter ones religious belief while rummaging through sales racks at Victoria Secret for pre-teen Tiffany or for naughty mom herself. That is until someone sales clerk excitedly and accidently mutters the wrong greeting of “Happy Holiday” to have the Christmas cheer drop and the cry of “It’s Christmas” screamed at to the talk show radio host. 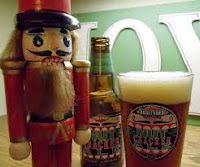 That’s it, slap the tap on some Nutcracker Ale and watch out for that pale of coal, you might get a visit from the EPA.

‘Let Me Respond To Your Lie’: Greg Gutfeld And Geraldo Rivera...

Save the applause, Congress just saw their shadow and called for...