Crystal Mason Was One Of Thousands Who Cast A Provisional Ballot. She Was The Only One Prosecuted For A Crime – By Sam Levine (Huffington Post) / Aug 21 2019

Mason was one of nearly 4,000 people who had a provisional ballot rejected in her county during the 2016 election.

During the 2016 election, almost 4,500 people cast a provisional ballot in Tarrant County, Texas ― the vast majority of which were ultimately rejected. But out of the thousands of people who tried to vote provisionally but were ineligible, only one person, a woman named Crystal Mason, was prosecuted for voting illegally. She was convicted in state court and sentenced to five years in prison.

Mason’s conviction drew headlines last year because it was so severe. Mason, who is Black, was on supervised release for a felony conviction and says she had no idea she couldn’t vote. Prosecutors say Mason is lying, and convicted her under the state’s illegal voting statute, which says it is a crime to vote or attempt to vote if you know you are ineligible. Their key piece of evidence is an affidavit Mason signed affirming she was an eligible voter. Mason is appealing her sentence and a hearing is set for Sept. 10 in Fort Worth.

New data obtained by HuffPost underscores how unusual Mason’s prosecution is. Provisional ballots are frequently rejected in Tarrant County, but Mason appears to have been singled out for criminal wrongdoing.

Mason’s lawyers argue her decision to submit a provisional ballot in 2016 did not amount to an actual “vote” because it was never counted. They also argue Mason has a protected right under federal law to cast a provisional ballot. The fact that thousands of people have voted provisionally in Tarrant County without facing criminal consequences could bolster that claim.

According to records obtained by HuffPost, 3,990 provisional ballots in Tarrant County in 2016 (some 89% of the total provisional ballots cast) went uncounted ― the vast majority because the person who cast the ballot was not registered to vote there. It’s not clear why these people weren’t registered. They could have been registered to vote in another place. Or they could have missed the state’s 30-day voter registration deadline. Or, like Mason, they could have had a previous voter registration canceled because of a felony conviction. 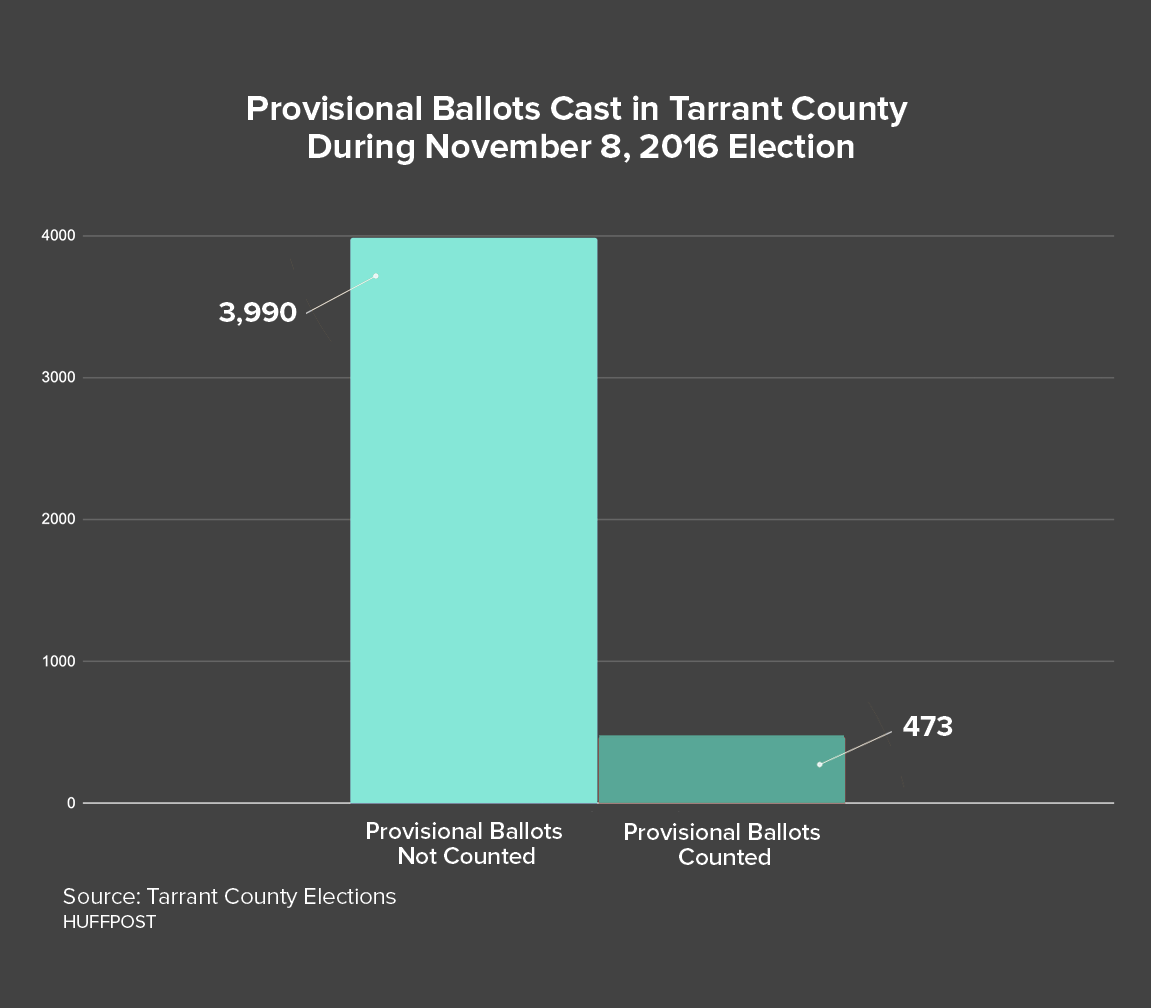 Since 2012, the district attorney there has prosecuted three people under the state’s illegal voting statute, according to records obtained by HuffPost. Two of the defendants used a regular ballot. One case involved a legal permanent resident who was sentenced to eight years in prison after she voted repeatedly as a noncitizen (she said she didn’t know she was ineligible). The second case involved a woman who voted in the November 2016 election after getting convicted of a felony DWI that September. That woman is serving a 4-year sentence in state prison.

Mason appears to be the only person in Tarrant County who was prosecuted for using a provisional ballot since at least 2012.

“I think that shows the extraordinary and unjustified overreach by the prosecutors in this case,” said Thomas Buser-Clancy, an attorney with the Texas chapter of the American Civil Liberties Union who is helping represent Mason.

A 2002 federal law requires election officials to offer provisional ballots as a safeguard for people who show up at the polls but find they aren’t on the rolls or can’t verify their eligibility. Election officials review the ballots after the polls close and count them if it turns out the voter is eligible and throws them out if they’re not. It’s a requirement born from the chaos in Florida during the 2000 presidential election, when voters turned up at the polls and suddenly found they weren’t on the rolls, said Barry Burden, a professor of political science at the University of Wisconsin-Madison and director of its Elections Research Center.

A spokeswoman for Tarrant County District Attorney Sharen Wilson (R) did not respond to a request for comment.

Experts could not recall other cases where people were prosecuted for voting a provisional ballot.

“The whole intent of provisional ballots is to service voters when the system kind of fails them for voter registration,” said Tammy Patrick, a senior adviser at the Democracy Fund who previously worked as an elections official in Maricopa County, Arizona. “I don’t think any other state is interpreting it in this way. To me, it seems inappropriate because it just doesn’t seem like that’s the letter of the law or the intent of the law, the heart of the law.”

Aggressively prosecuting people who had their provisional ballots rejected could deter legal voters from trying to vote, said Buser-Clancy.

Target raised wages. Then it cut workers’ hours and doubled their...

Muslim Groups Are Bracing For Trump To Stop Muslim Immigration