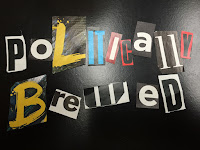 I remember after 9/11, a conversation with my mom’s then husband too which he had asked the simple question “Where or how do you think it may happen again?” I simply replied “we’ll never know because it can happen anywhere by anyone?”

You’ve done it. You’ve tried to answer it because it’s human nature to always discuss the “what if” speculation after a major event.

The problem too many have is that they truly only believe in foreign terrorism and that anything considered domestic terrorism is just stereotyping some redneck Mid-Western looking individual driving an old pick truck or crew-cut individual wearing clothes they bought at the old Army/Navy store who talks tough and wants to play soldier in the woods with his buddies on the weekend gathered around a campfire. Yet everyone knows a terrorist always has a Middle Eastern appearance and works at 7- Eleven, right?

I bring this up because of two stories from over the weekend that received small amounts of news with lots of speculation as to who would commit such crimes. First there were the three individuals arrested for planning car bomb attacks for Nov 9 in a small Somali community in Liberal, Kansas.

Did you catch that date? Nov 9th is the day after this year’s Election Day, nice timing.

Now per the reports, the three individuals busted were part of some sort of militia called “The Crusaders” and that Liberal, Kansas is a small Christian faith Conservative community with Trump/Pence yard signs planted throughout. So you can see where people have begun their speculations and finger pointing, right? Yep, these individuals were some sort of “Christian” hate group, yet those interviewed around town pretty much say the same thing “those guys obviously don’t believe in God as we do… We help those in need, especially those in the Somali community.” OK, yes I’m paraphrasing the words, but you get the point.

But the connection between the “hateful Christian faithful” community and the planned attack on foreign community is a constant in our society for how long now?
From all I’ve read so far, these guys were a bunch of ignorant jackasses and true faith had nothing to do with it.

Then there’s the story of the North Carolina GOP headquarters that was firebombed on Sunday that had a few individuals blaming the DEM’s for the violent act, even though there is no indication as too who’s at fault.

Why the GOP HQ was chosen is still a huge question, but we’ve got to have a villain picked out immediately to throw stones at, and in this case, Donnie immediately called out the dirty DEM’s for committing the act. Why would he do so, well; 1. Donnie is losing by 4 points in North Carolina right now per the polls, 2. The area is heavily populated DEM registered community, 3. The individuals spray painted “GOP” and “NAZI” on the side of building. So add it all up and “BOOM” it clearly adds up.

Problem being the investigation just started and there’s no evidence reported to media yet. But we need a villain and Donnie spouted it out, the Alt Right media jumped on board and now the misinformation is now fact until the authorities tell us otherwise.
Whoever did commit this crime, I hope they are apprehended soon. Also kudos to the DEM for setting up a “gofundme” to help the GOP HQ get back in business, although some will wave that off as some sort of cover up.

Why am I ranting about all this? Because it’s all Domestic terrorism that people will not believe in.

Yes these are also random events that have no connections that we know of, but that’s what “speculation” is all about.
There is more to my response to the question “Where or how do you think it may happen again?”

As I replies “we’ll never know because it can happen anywhere by anyone?” and time has rolled on, authorities from local to federal have taken major precautions to large gathering events such as Inauguration day, Super Bowl and World Series. But those are specific giant events that bring lots of attention in person or on TV. And yes we’ve seen what can happen at smaller events such as the Boston Marathon bombing, which had many people displaced along the marathon route.

But what about a major event that has major implications for over 300+ million individuals that authorities cannot patrol all at one time, like Election Day?
Think about it. Election Day is an all day nationwide event that begins around 700a Eastern and ends around 1000p Pacific. OK I excluded Alaska and Hawaii time zone, yet the point is, voting happens everywhere; church basements, school gyms, community centers, post offices and even (depending on the town) someone’s living room.
What could stop someone from committing a heinous act in any of these places while they are open 12 hours of the day?

With all the hatred out there in our society, not over there in another land, right here in the US, there are more people here who want to cause more harm to us than those guys over there. And with all the disgust happening in this Election cycle, it wouldn’t surprise me if we hear more and more about “events” happening all the way to Inauguration Day.
I know somewhere someone is reading this thinking “what kind of f*ck up mind does this guy have?” Grant it, yes I think of some f’d up things sometimes, some for laughs some out of simple observation, yet the point is simple that people need to open their eyes and stop stereotyping everything.

People aren’t wearing little stickers that say “Good Guy” on them, no they carry badges and they’ve sworn to protect citizens at all costs.
CHEERS!

© 2016 Web Design By Drift2 Web Service
MORE STORIES
Todds Posts
Politically Brewed - October 5, 2016 0
So if two things are guaranteed; death and taxes, and Donnie was able to cheat taxes can he cheat death?Ok I know he didn't...