The image of Trump appearing to hold two ginger felines in his arms while wading waist deep through floodwater began circulating among his supporters in the wake of the devastating storm.

One pro-Trump Facebook page, called “All about President Trump,” posted the snap with the caption, “Things the media forgets!”

That post alone has now been shared more than 16,000 times.

But as the myth-debunking Snopes.com has proved, the image is totally fake.

Des Moines Register photographer Harry Baumert actually took the original photograph of a man named Brandon Smith who was saving his two cats from flooding in Cedar Rapids, Iowa, in June 2008, per the website.

Someone else has now simply edited Trump’s head and his red “Make America great again” cap into the snap. Baumert’s initial photograph no longer appears to be available online, but photographer David Greedy captured a similar scene at the same time: 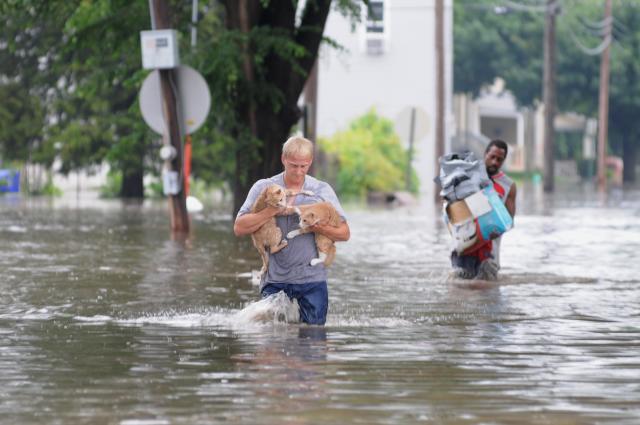 Snopes has also recently disproved another Harvey-related image, which purported to show Trump rescuing someone from the water in a boat:

PB/TK – I’m so confused. I’m told CNN is fake news but then POTUS Donnie supporters pass along these stories that just add to the “Liberty Valance” myth

Why Biden Thinks McConnell Could Join His War on Malarkey (Slate)