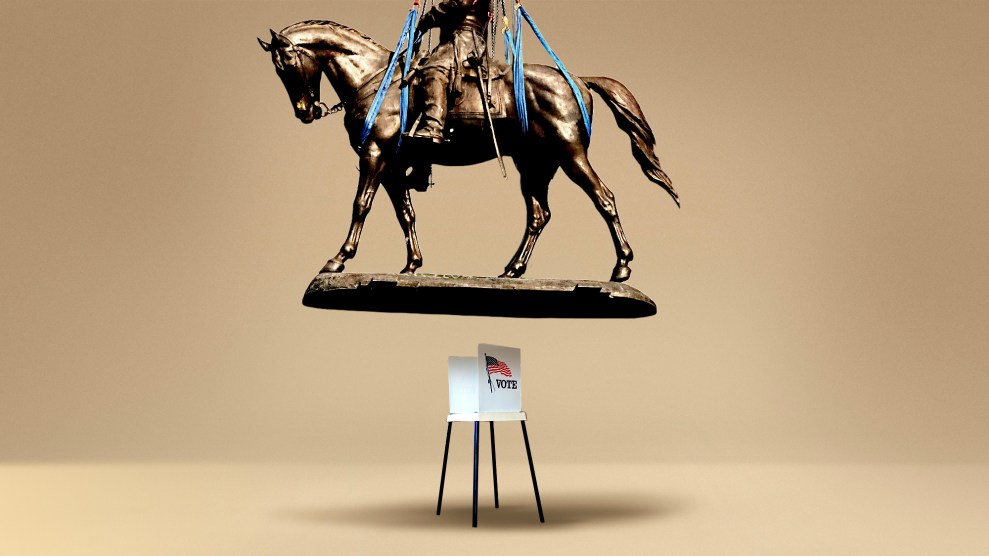 The move, which sparked a lawsuit, could disproportionately harm Black voters.

Fight disinformation: Sign up for the free Mother Jones Daily newsletter and follow the news that matters.

Update: On the afternoon of Nov. 18, the Fulton County, Georgia Superior Court ruled that Georgia counties may allow early voting on Saturday, Nov. 26, citing the “absence of settled law” on the issue. A spokesperson for the secretary of state’s office said in a statement that the state would appeal the ruling.

Robert E. Lee, the commander of the Confederate army that fought to preserve the enslavement of Black people, died in 1870. One hundred and fifty-two years later, a holiday honoring Lee’s legacy is contributing to a decision by the state of Georgia that could disproportionately harm Black voters.

Because neither incumbent Democratic Sen. Raphael Warnock nor Republican challenger Herschel Walker received greater than 50 percent of ballots cast in the Nov. 8 midterm elections, Georgia will hold another election, called a runoff, on Dec. 6, to determine which candidate will represent the state in the US Senate.

The 2020 Senate elections in Georgia also led to runoffs, but they were held nine weeks after the November general election, rather than the four weeks prescribed by a controversial Georgia election law—Senate Bill 202—that was pushed through by Republicans in March 2021, partly in response to Donald Trump’s false conspiracy theories about electoral fraud.

The sobering truth about quitting my job: I was addicted to...

Politically Brewed - December 30, 2021 0
Best of 2021: The sobering truth about quitting my job: I was addicted to high-stress nonprofit work - By Jackie Lieske (Salon) / December...
Skip to content