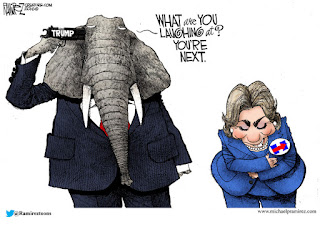 Think about it, the everyday usage of the words “endorse” and “support” are pretty similar in definition, however in the political arena the spin on the definitions hold greater meaning, especially in the Media and the hardcore party card holder.

I’ve always wanted to hear establishment members of either party say they can’t endorse a presumptive candidate and I always felt the GOP would be the one to fall first, more or less in thanks to the 2010 Tea Party invasion. But as “independent” as many GOP’ers say the party is, they sure are showing their colors and calling out any politician that is not “endorsing” the presumptive candidate Donnie.

I ain’t sticking up for the DEM or Hillary. DEM’s have been drinking the juice like it’s a Jonestown revival way too long in hopes of anointing Hillary to her throne. Actually I think it’s a prerequisite to swallow a big gulp once you check the “D” on your voter registration card. Hell even a large majority of the Bernie backers will fall in line when the Philly convention begins because they know it’s a safe bet and the DEM establishment’s backbone is very flexible to appease their demands.

But with five months left till the election, the “endorsement” game is in full motion. It’s fun to watch Punditries excitement to announce who’s ready to endorse, even if it’s only a Pseudo-celebrity. But the numbers don’t lie and show the party loyalty is stronger in the DEM.

As we know, the GOP holds the majority in the Senate and House, plus Governors. Currently, 12:54 Senators, 30:247 House Reps and 13:31 Governors have all pledged their undying endorsement to Donnie. Small numbers when considering the Clinton inaugural ball has already seated the current 40:46 Senators, 182:188 House Reps, and 16 Govs.
Hey give the DEM props for keeping their politicians and fandom in check.

In a way, one can understand the GOP’s crusade to find a loophole to rid themselves of having to listen to Donnie’s victory speech in Cleveland, but it’s their own fault. By having a lackluster stable of candidates for the past three Presidential election cycles, two of which were theirs to lose, it was inevitable that someone like Donnie would be victorious. The GOP is now trying to reign in a person whose character is what people have been asking for; a tough talking, strong backbone, non-apologetic candidate or the complete opposite of McCain and Romney. GOP leadership has time and time again instructed Donnie to “tone down the rhetoric, stop speaking in abbreviation, and get on script” to rid themselves of looking like a bunch of monkeys f*cking a football.

Sorry but the analogy fits the GOP this election cycle.

For all the off color remarks, arrogance and multiple trips to Principal Preibus’ office, Donnie simply will not be broken. The Media and GOP establishment (not to mention other campaigns) never took Donnie’s entrance seriously as they considered it a typical Donnie stunt to garner the attention he relishes and if he went forth it would be a “quickie, in & out” run because he just cannot handle negativity in an adult manner. But for all his cringe worthy sound bites, he has gained momentum but what does that actually show; are the so called base tired of the career politician? Are they really tired of PC candidates bending over to gain popularity points with outside party demographics?

The genius of the Donnie campaign with spewing one-liners, spitting insults, and of course soapbox knee jerk reactionism sound bites has people gathering and Media loving those ratings. He has forced every candidate, politician and punditry to consistently mention his name during every interview.

The Media feels it’s necessary for those who have endorsed to address Donnie’s actions and as of late it’s left many out in the cold with his folk. Speaker Paul Ryan has been taking heat for not jumping on board the endorsement train immediately and then when he finally did, it was in a “ho-hum” manner yet that has had him scorning Donnie’s remarks which brought Sarah Palin riding her caribou from the Great White North in an attempt to knock Ryan out of office.

Psst! Hey Sarah, even he loses his primary, he can still be speaker, but since Ryan is ahead by 90% I’d say keep your day job (whatever that might be).

No matter how many times the GOP establishment will have to wave their magical hand, the mouth of Donnie can’t be stopped. They’ve tried the teleprompter adjustment, they’ve tried handing him scripts, they’ve requested softer voice, but it has proven all for not as the Media loves unscripted Donnie.

Half-witted statements such as; “He’s not a war hero. He’s a war hero because he was captured. I like people that weren’t captured,” when talking about Sen. McCain’s failed 2008 Presidential bid or in pointing to an African American supporter at rally: “Oh, look at my African-American over here. Look at him.Are you the greatest?” to the current “ask the gays” when asked about which candidate will be more supportive of the LGBT community, have the GOP scrambling like the Keystone cops, trying to control the fire and get back on message. 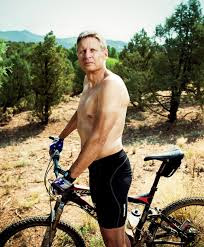 It will be interesting to see if the GOP endorsement numbers go up or how many will cop-out and go for the “supportive” role to save face come November. As I’ve stated in the past, I am not endorsing nor supporting either Hillary or Donnie and that leaves the only alternative as Gary Johnson. But then he had to go and pull a “Putin” with a shirtless GQ photo shoot!

That’s it, slap the political tap and stock up the liquor cabinet because it’s gonna be a bumping 5 months

Politically Brewed - June 2, 2015 0
Welcome back my friends to the show that never ends come inside come inside. Yes it’s that time again when all the hopeful/wanna be/...