It’s time for an election sabbatical which means the Media will be pulling stories out of their ass to pass the time.

We’ve reached the point in the election season when the electorate takes a collective *sigh* and punches out for a break from a very toxic campaign season. Yet with people punching out till the Party conventions commence in a few months this leaves Major Cable networks to keep plugging away every day/every hour with regurgitated or “creative” stories hoping to keep ratings up and viewers in their seats.

Except MSNBC, they have to make sure they replay old “Locked Up” episodes or fulfill their Soccer telecast contract.

Yes, a large majority of the voting population has begun to check out on the campaigns. Events like proms, graduations, last day of school parties and scheduled vacations are taking over while others are manicuring their lawns or smoking out the neighborhood with cookouts. And why shouldn’t they, the interest had peaked a few months ago and now it’s time to decompress till the next go around.

The presumptive candidates have been crowned even though a couple still are hanging onto hopes of some sort of miracle to happen. Debate theatrics are on hiatus till September and all that’s left to report are personal attacks and “road warrior” journalism, as it becomes a “guesstimation” of policies, renewal of pundit contracts and a much needed campaign refresh. 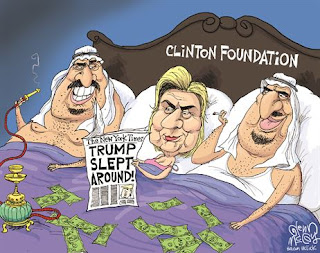 Media may soon hire Psychologists to chip away at Trump’s mommie issues, Psychic medians sent to Fort Marcy Park to conjure up the ghost of Vince Foster or possibly contract the breeders of the late Clinton pet Buddy just fill time.

Move along, move along there are no stories to report here. Well none that we haven’t heard before.

I have fun with my Facebook/Twitter postings poking fun at our political system. Articles on politics, punditry, politicians, campaigns and other articles of interest has become a great social experiment. It’s easy to compare those that are “talking point memoheads” or those that are just repeating what their fave pundit spewed on the air to those that pay attention to the full spectrum. Sometimes the conversations are respectfully disagreeable while others are not for the casual viewer.

Yet over the past week or two, the conversations have dropped as people have heard enough of Hillary/Donnie promises or hatred of the other party. You know the “Soros fiends” and “Koch suckers” comments. People need to take a collective breathe, stop finding new avenues of entertainment to ridicule the opposing political thought or share some absurd meme that will eventually become truth to some because it’s easier to believe than to research.

Every campaign cycle, political conversations have become more of contact sport then intelligent debate. Better get a helmet as this year’s looking to be a keyboard bravery slobber knocker. Also, look into buying a good pair of hip waders, as a “yuge” wall of bullshit is about to go up. 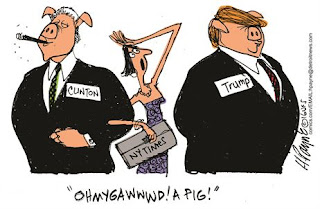 The Media is filling the void with debates on Donnie’s alter-ego “John Miller,” Billy’s past love affairs, rankings of the biggest womanizing presidents and of course tax returns. Why? Because people love tabloid stories concerning the candidates who claim to be “just like you” or what was last week’s printed story to be considered “misreported/misquoted/misprinted” to be argued by paid campaign pundits.

We need, no, we want tabloid stories too keep our political bellies happy till the Conventions in a few short months.

I admit I find humor in the renewed attacks in Bill Clinton’s history of “extracurricular” activities because once Donnie’s womanizing history enters the conversation its immediate backlash. Neither past is acceptable but then again I don’t recall Billy going public calling Lewinsky or Jones fat pigs or hideous looking individuals.
It’s the void between now and the first Presidential debate that the Media will use to help sway the undecided so be afraid, be very afraid. But will all the waiting have people change their minds? At this point, too many have invested too much time in making sure the opposition does not win regardless if the candidate has their favor. But isn’t that the real issue; is this the right candidate to represent your political party or just the last person standing?

We can talk about all the flaws and embellishments of the anointed Hillary/Donnie candidacies. Actually Media will do the talking and those that are heavily invested in their party of choice will just repeat those words.

It’s the folks that I have talked too that are planning to sit out 2016 all together in some form of protest thanks to Hillary/Donnie. This cannot happen! We have a responsibility to make sure people get their asses to the voting booth in November.

It’s simple. OK, you don’t like either presidential choice, I get it, and I’m with ya. However there’s more to Election Day then just picking a president. Representatives and Senate seats are up for grabs at all levels of government and not to mention action on local/state issues on taxes to policy change on contracts. If anything go to the booth, vote for the issues and write your name or “none of the above” for president.

In all honestly the 2016 Presidential election has always been the GOP’s to lose and what have they accomplished thus far is like watching a monkey trying to f*ck a football. One would think with so much internal strife people are hoping that delegates pull some sort of Delta House walkout while humming the National Anthem.

And for all those people that say “by doing that it’s a vote for Hillary/Donnie” just shut up. My “none of the above” vote knocks out one of those Hillary/Donnie votes as well. So call it even and go drink a double Key Lime Pie Frappuccino with caramel sprinkles, wrap your man-bun real tight and puff on your e-cig. 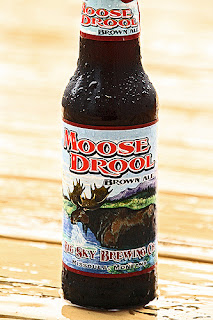 Then again people are more interested in the politics of the latest Captain America: Civil War movie then the realistic politics of ass kissing lying adultery obsessed fat women mockery tax cheating storylines of Campaign 2016 that the Media is obsessed with.

That’s it! Slap the tap on some Moose Drool while paying your political tab and keep checking out Maple Match to find a Canadian willing to bring you into their home

Franklin Graham Hits Trump for Demonizing the Press, Claims He Can...