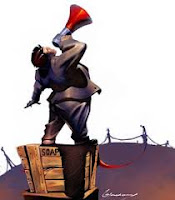 Politicians and Media alike know not to leave a good tragedy go to waste.

If there’s one thing in today’s society that’s true, it’s that one incident can cause a shock wave of reaction across the land. Regardless of the event/issue, how “all” things Media portrays it will equate to a ratings knee jerk reaction around the social media water cooler.

I have many issues when it comes to politicizing someone’s death for one’s own personal gain, whether it’s the senseless murder of Ms Kate Steinle by an illegal immigrant to Ms Terry Schiavo’s parents fight of removing her life support system to “American Sniper” Chris Kyle’s murder by a fellow member of the military. In the case of Mr. Kyle, the popularization of his death has pushed the issue of PTSD’s of returning members of the military to a greater light for many to understand. And now, Ms Steinle’s death is pushing the on/off again battle of Immigration reform to the top of the pile.

Well at least for this week, but whom and what shall be gained depends on the masses?

To get up to speed, by now all know that Ms Steinle was murdered by a five time deported illegal immigrant Juan Francisco Lopez-Sanchez at scenic Pier 14 in San Francisco. Sanchez states he accidently shot Ms Steinle while shooting at seals with a gun he found on a bench at the Pier. A gun we have later found out belonged to an unnamed and obviously irresponsible federal agent.

Honestly I was expecting some pundit to link the gun to Obama’s failed “Fast & Furious” program.

Now as the case builds against Sanchez, many have taken the path of politicizing this sorrowful event for gains, even though after Steinle’s death the family had requested that her death not be politicized, with her father, Mr. Jim Steinle, stating “We’re not dwelling on that. That’s not going to bring Kate back.”

And now a few weeks later, when grief has turned to anger, the Steinle family now wants to see action at all level of government, as they feel it was their inactions on Immigration reform that caused Kate’s death.

Appearing on the July 13th episode of Bill O’Reilly’s Fox Show, Mr Steinle simple said “We feel the federal, state and cities, their laws are here to protect us…But we feel that this particular set of circumstances and the people involved, the different agencies let us down.”

Now Bill O’Reilly has had many soapboxes to stand on over the years; from his ongoing War on Christmas and now “Kate’s Law.” To me at least, “Kate’s Law” seems rather hastily thrown together as most reactions are and very vague in detail. 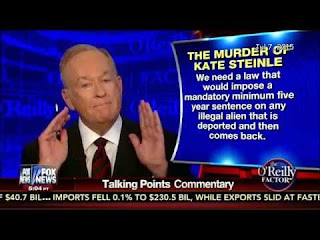 Let’s explain Kate’s Law. Right now it is not a “Law” but a petition that anyone can sign, created by O’Reilly to be sent to Speaker Boehner and Senate Leader Mitch McConnell that would impose a five year prison sentence on an illegal immigrant who was once deported and was apprehended again illegally.

“We, the undersigned, respectfully ask Congress to pass Kate’s Law whereby undocumented aliens who are deported and return to the United States would receive a mandatory five year sentence in a federal penitentiary upon conviction”

Don’t get me wrong, I’m for Congress to finally do something on Immigration and I have harped many times about wanting more Border Patrol money to secure our borders. But imposing a five year federal prison sentence on illegal immigrants for those that have returned after being deported sounds awesome but not economical in the least of sense or cents?

It’s a reaction that sounds tough and tugs on the heart strings but solves nothing about illegal immigrants in the country. It will not stop anyone from crossing open borders or living here illegally on expired work visas. It does however place a massive toll on the prison system and the taxpayer checkbook.

Currently there are an estimated 11.6 million illegal immigrants in the US today with roughly 51% of that number being from Mexico. It costs roughly $12,000/person to deport, so if we deported just the Mexican population (5.9 million est.) it will cost taxpayers an estimated $70.8 billion in total cost.

“Kate’s Law” is petitioning a five year federal prison sentence for any illegal immigrant apprehended in the US after being deported. So the taxpayer math again is a monstrous account as it costs around $25,000/person to house, feed and clothe in prison.

The clincher is that prison cost will swell with every additional person caught. So why give them free housing, clothes and food for five years?

Those are some large numbers and when we keep hearing people clamoring to reduce the spending of government, well the numbers only add up to a growing debt.

Sorry but building a “southern wall” is only the smallest of fraction in security. Illegal immigrants and cartels have proven tunnels can be built with or without a wall to cross under. Not to mention the cost of building such a wall will be astronomical. For instance, between 2006 thru 2009, Customs and Border Protection spent $2.4 billion to complete 670 miles of single layer fence. The Mexico/US border stretches over 5,250 miles. Do the math on that one.

But let’s add this little nugget. The construction sector is the largest employer of illegal immigrants and guess who’ll help build the vast majority of fencing along that border?

Just Google Golden State Fence Company and see how they were fined around $5 million for hiring illegal immigrants to build the border fence outside of San Diego and around military bases as well.

We have to look at the cause for so many illegal immigrants crossing the border; JOBS! 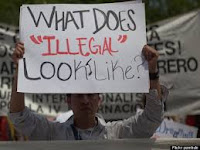 We can keep this conversation going and talk about the expired HB1 Visa workers, how companies exploit the current loopholes and are the driving force behind the last attempt of Immigration reform for their own better good, meaning profits. But no one wants to talk about that, because there is a stereotype many have imbedded in their mind of what an illegal immigrant looks like and these corporation exploited workers are earning regular paychecks and paying their dues to society. Yet they’re still illegal and no one cares. 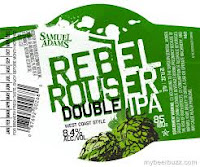 That’s it, Slap the tap on a Rebel Rouser Double IPA and pay your political tab. Oh wait I said “Rebel” I guess there’s another politicized knee jerk reaction that’s bubbling over for someone’s gain.

© 2016 Web Design By Drift2 Web Service
MORE STORIES
Todds Posts
Politically Brewed - October 5, 2016 0
So if two things are guaranteed; death and taxes, and Donnie was able to cheat taxes can he cheat death?Ok I know he didn't...