Since the deadly terrorists attack on the French cartoon magazine Charlie Hebdo, the world has come together in solidarity for France, well Parisians at least, in their disdain for Muslim terrorism. Wait let’s be clear, Radical Jihadists who have perverted a religion into a misguided belief for their political gain. 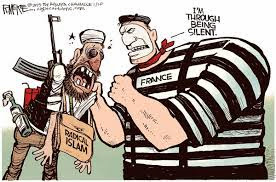 That last sentence is a better description for all to use. Sadly many will not.

But how long will this “world solidarity” last? Well if calculations are correct, I give it another four days and that’s because the Media will grip onto another story to report on with 24/7 coverage. Maybe a story linking Havenese dog owners to secret communist sleeper cells in the US waiting for the “bark” to awaken them.

But I think I figured out the true meaning behind this sudden “solidarity.” It’s 2015, a new year, a new battle to get behind for a few weeks.

Think about it. How quickly did the unity of people against Boko Haram vanish shortly after the kidnapping of 200 school girls? Here and gone in three weeks. And take note, while the eyes were on Paris last week, Boko Haram murdered over 2,000 people in a week’s time and very little mention in Media to account. It wasn’t until Monday Jan 12 (almost 7 days after Charlie Hebdo) did I hear this reported in FOX and CNN.

How about today? Are we all united with Germany after a bombing attempt on German paper Hamburger Morgenpost on Jan 13 for reprinting the latest Charlie Hebdo cartoon?

Yet many are too busy bashing President Obama and higher administration in Media and Social Networks for not attending the French solidarity march. Yes, it annoys me that only the American Ambassador to France, Jane Hartley was in attendance amongst the masses. But then again, it’s part of her job description to be the face of the US when any event happens in that current residence.

No, that’s not an excuse for President Obama, but hell he could’ve called on Presidents Clinton or Bush 43 to see if they could attend. For crying out loud, even Jimmy Carter would’ve jumped at the chance for media exposure! Yet he was in NYC waiting to for his appearance on the Daily Show.

People need to understand that our freedoms are ours and not for everyone else.

There’s been a long dislike for France from the US going all the way back to Madison! Our longest living ally in the World, who helped fund our Revolution and we mock them in a routine basis that makes one wonder, “Why the hell do they even talk to us?”

I mean they gave us the Statue of Liberty. Well only after Egypt rejected it and we had to fundraise about 3/4 of the money to erect Lady Liberty, but dammit they gave it to us. 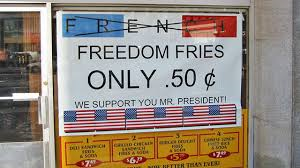 When the US was talking about invading Iraq in 2003 over possible imminent threats, France was vehemently opposed to such action (along with Germany). So what do we do? We play a name change game. That’s right, Senator Bob Ney had the three Congressional cafeterias French fries renamed “Freedom fries.” Many restaurants followed the action, more as a PR stunt to gain business.

So childish. Why not just write on the bathroom wall “for a good time call the French Embassy at 555…..”

But where was the solidarity march after 9/11? Phone calls from world leaders to the White House were made and only one visited two weeks afterwards, French President Chirac.

People around the World laid wreaths at American Embassies after 9/11 and held mini rallies from Moscow to Beijing as they did shortly after the Charlie Hedbo attack.

Did Americans lay wreaths at French Embassies after last Tuesday’s attack? Nope, not even a baguette for a pigeon to steal.

What about more recent attacks in the US, was there a solidarity march after the Boston Marathon? Nope, just a bunch of phone calls and press releases from Moscow to Paris to Rio announcing their solidarity with the US. As a matter of fact it took British PM Cameron 4 weeks to visit the US and visit the Marathon Memorial.

So is Obama off the hook if he plans a trip within the next few weeks to visit France?

As a little side note, those Foreign leaders that arrived and “marched” among the people only walked a small few steps due to security reasons. And shouldn’t people have anger against the French for telling Israeli PM Benny Netanyahu to stay home and not partake in the march?

Benny crashed the party anyway. Gotta love the guy, he flips everyone off, not just one for telling him what to do.

Yes, it’s wrong that in Paris and around France they allow pockets of “No Go Zones” for ethnic communities to tend to themselves. No police or military presence, no one other than that ethnic race allowed in. But when you keep a people penned into an area and not expect a form of radicalism to spawn, well that’s a major issue. You allow them to police themselves, kinda like a Radical Jihadist Neighborhood Watch program (please no George Zimmermann jokes). 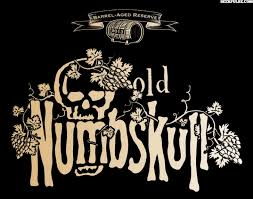 That’s it, slap the tap on the Old Numbskull Ale in solidarity to all the open political tabs in DC. Because we know Congress ain’t gonna pay the bill

please enjoy the tale of “Zombie Donald Trump” by ConJay

Politically Brewed - October 8, 2016 0
Political science, hell life in general, has proved how parents can influence a child’s mind especially when it comes to politics/current events. In my...
You are going to send email to
Move Comment