Over the past few weeks in Northeastern Pennsylvania, authorities have been on a manhunt for Eric Frein, a man accused of ambushing and killing Pa State Trooper Cpl Bryon Dickson and wounding Trooper Alex Douglass outside of their Blooming Grove police barracks.

The search has many residents in the surrounding area asking what has been taking so long to find Eric Frein while media outlets are leaving for more fruitful stories. 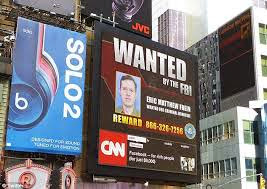 Described as a “self-taught survivalist,” Frein enjoyed researching Cold War era propaganda for role playing in weekend “war game” movies and paintball style groups that possibly helped in taking a real world anti-government belief. He has been leaving breadcrumbs of food wrappers, homemade pipe bombs, rifles and even a journal in the wooded Pennsylvania hills, leaving authorities to believe he has not ventured outside of area.

Recent history has proven that trying to find this style of criminal, a survivalist, is quite a lengthy process. Simply knocking door-to-door and releasing a pack of bloodhounds is only the smallest of steps in the process

Strangely, the case of Eric Robert Rudolph jumped into my head as soon as I heard about the Pa State Police shooting, mainly because I wrote a lengthy college term paper on the 1996 Centennial Olympic Park bombing for a Judicial Study course on Terrorism. Yes, there is such a course of study at my university and as a Liberal Arts major that concentrated in both Political Science and Judicial Study it was a natural decision to take the course.

For many that may have forgotten, Eric Robert Rudolph was apprehended for his involvement in the 1996 Centennial Olympic Park bombing as well as linked to a couple of other bombings in the cities Atlanta and Birmingham. 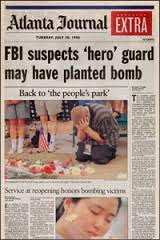 We don’t have to go into all the details of how the Feds and Atlanta police got the wrong guy in Richard Jewell after the bombing (thanks to “eyewitness” reporting). However it took the authorities a little over 18 months (July 1996- Feb 1998) to name Eric Robert Rudolph as the main suspect. Then another eight months later to add charges of bombing an Alabama abortion clinic to his file.

For two years, authorities concentrated their long extensive search for Rudolph in the wooded hills of North Carolina. And within that two year timeframe, a Federal grand jury indicted Rudolph on a total of 23 charges for the Centennial Olympic Park bombing and two other bombings in Atlanta, as well as one in Birmingham, to Rudolph’s dossier.

Over the next five years, while the number of authorities searching for Rudolph dwindled, he lived off the grid in the woods and mountain ranges of the South, living in abandoned cottages and lake houses for shelter. Trapping game for food as well as rummaging through back alley trash cans for leftovers while, also playing games with authorities by leaving newspapers and other paraphernalia in makeshift campsites to keep them at bay.

He survived; he knew how to do it. But the question many asked was; did he do it alone?

Many believe that local communities harbored Rudolph by purposely leaving food and clothes for him in secluded area, why? Rudolph, even though considered a loner, had a deep resentment of anti-government and anti-abortion belief, both of which have had a large expanding representation especially in the “Bible Belt” of the South.

The only proof of any help towards Rudolph was by grocery store owner George Nordman. After heavy interrogation, police had concluded Nordman’s involvement was a “forced cooperation” as Rudolph secured over food and items from his grocery store and charges never filed.

It wasn’t until May 2003 that rookie police officer Jeff Postell stumbled upon Rudolph rummaging through an alley garbage can behind a Save-A-Lot grocery store in Murphy, North Carolina. The young officer had arrested a cooperative Rudolph for simple theft, not knowing that he was America’s #1 Most Wanted at the time.

Does anyone remember a few years ago, 2009 to be exact, when the Dept. of Homeland Security produced a report on home grown terrorism titled “Rightwing Extremism: Current Economic and Political Climate Fueling Resurgence in Radicalization and Recruitment”?

Yes, the report that many media and political talking heads lambasted because it only focused on one style of extremism, Right wing. But there is truth within the report if you look at actions over the past 25 years.

Yes, there are two types of extremist; Right and Left.

A good definition of “Left wing extremist” is “seek to abolish all forms of hierarchy, particularly the inequitable distribution of wealth and power” compared to the definition of “Right wing extremists” as “hate groups who target racial, ethnic or religious minorities and may be dedicated to a single issue.”

The huge difference is in the ways they express their belief and it can be defined with one word; Violence.

So think “Anonymous” vs. “Sovereign Citizens.”

While pretty much everyone as heard of “Anonymous” many have never heard of the “Sovereign Citizens.” 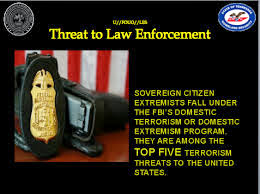 The “Sovereign Citizens” are a spinoff of the defunct white supremacist extremist group called “Posse Comitatus.” Both groups had/have a large anti-government following and many of its 300,000 members held the same belief, the only government to listen too is local. Many did not carry social security cards, work under the table to avoid taxes, create scams, possess illegal driver licenses/ license plates, not registered to vote, and most importantly buy/sell/trade weapons.

Groups like the “Sovereign Citizens” have been able to motivate their belief of not trusting the government over the 20 years, using economic downturn as feeding frenzy too anyone that will listen. Much of their motives and believes are not violent in course, but it only takes one lone individual to take the extra steps towards fury. And thanks to the Internet, this type of extremism is growing at an alarming rate.

That “lone wolf” scenario we’ve heard about time and time again in media, well it’s that extremist that takes extra step and since 2000, a “Sovereign Citizen” member has been involved in six police officer deaths. The most resent in 2012, when Jerry and Joseph Kane killed two police officers during a routine traffic stop. 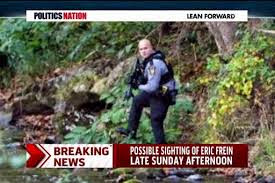 This comes full circle back to Eric Frein, a man that many of his friends described him as an “average Joe” who was never the gung ho guy in the group, but indeed a loner of sorts, with nothing to tie him down to stay in place, both home and work.

I suspect Eric Frein will eventually be apprehended, not tomorrow but in a couple years. And just like Eric Rudolph, it will be his own ploy of deception that will be his downfall.

That’s it, Slap the political tap and find your favorite chilled political brew.

MORE STORIES
Todds Posts
Politically Brewed - October 14, 2016 0
“it doesn’t matter” whether the women are “liars” or not because the conversation about sexual abuse distracts from “the real issues" - Dr. Ben...
You are going to send email to
Move Comment