Since the clock struck midnight on Nov 4th, 2014, Media immediately started their “2016 countdown” clock to a huge crop of hopefuls, wannabe’s, has-been contenders to battle Hillary Clinton come Nov 8th 2016. And the choices thus far, well, are the expected bunch since Election Day 2012.

Look at this way, at least everyone can recycle all their 2008 Hillary Clinton promos. We’ll discuss Hillary’s entitlement of the Oval Office since 2008 on the next blog. But today, it’s all about the GOP baby and as hard as it might be for many to fathom, there are many in 2016 I’m keeping an open mind for. 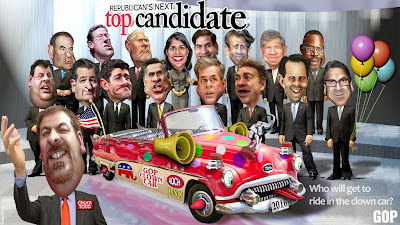 But as we wait with baited breathe, we’ve been stuck in the muck for the past few months of “breaking news” of this or that candidate “forming an exploratory committee” too see if they have the popularity to make such a run. All the while, padding their newly formed PAC’s with donor dollars as high as can be.

As par for the course of the past 14 years, the GOP seems to be the party with the deepest roster of presidential candidates and what appears to be their election win. But then again so was 2008 and 2012, and somehow they manage to bungle the big show only to perform an autopsy of sorts that may have educated them as to went wrong.

Currently there are about 20 contenders for the GOP, some familiar faces, some fresh faces and the majority *sigh* are just there because someone patted them on the butt and said “you can do it.

Familiar names and faces such as Senators Teddy Cruz, Rand Paul, Lindsey Graham and Marco Rubio are mixed with current Governors Chris Christie, Scott Walker and John Kasich followed by the “formers” of Jeb Bush, Rick Perry, Piyush “Bobby” Jindal, Mike Huckabee and Rick Santorum that many consider to be GOP Group “A” of the crop.

Although I’m not sure how Senator Graham could be considered part of Group A but we can see how that works out in the coming months. And yes, Huckabee, Santorum and Perry have a huge following to keep them in Group “A” standings.

And of course there are the few that are still hanging their hopes that Willard “Mitt” Romney will change his mind and go for a third campaign run. 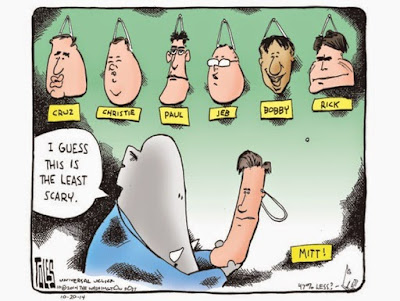 But it’s all gonna come down to who can lead the headlines the most. I’ve repeatedly stated Romney wasn’t the true choice of the GOP in 2012, just the last man standing in the field. Media on both sides of the aisle helped set that up.

We’ve already have been inundated with the hype of those that have announced in April and there’s whispers of more to come in May. But is it just jumping the gun to eventually get drowned out by those that linger to step up on their soapbox? Or will those that have stamped their campaign tickets early will fizzle out with Media and become partisan fodder with rookie mistakes?

We could spend a good hour only talking about a specific policy idea by each candidate, yet it seems they’ve been focused on just blasting Hillary, knocking ACA, eventual war with Iran and telling everyone why they are the one while the others suck.

Seriously, Huckabee seems to have the “Bubbha” vote all to himself while Fiorina is truly only concerned with a workers platform. Oh not American workers, but that of revised HB1 VISA credentials so American business can hire more foreign workers so business wouldn’t have to pay benefits.

Or about how Rubio, Jindal, Santorum, and Cruz feel about “gay marriage” and whether or not they would enjoy pastries from the cookie table if they attended a gay wedding reception. (Note: If you haven’t been to or had a wedding with a cookie table, you’re missing out.)

So far the “Freshmen 3” of Paul, Rubio and Cruz have announced their intention and now we’ve been told the upcoming expositions scheduled for Carson (May 4), Huckabee (May 7) and Fiorina (May 7) are just around the corner.

Only Cruz’s announcement was met with great flair with a few dogs and ponies as well. Oh come on, he’s announcement was well rehearsed, just like any Obama engagement. Sorry but when you have to practice a “celebratory kiss” with your wife; I wonder who the puppeteer above the stage is.

Honestly, I like less theatrics and more of the candidate. And hearing about how Paul’s intentions were rounded out shortly after he won his Senate seat back in 2010, I would figure he’d have less people introducing him and instead have a few balloon artist on stage performing their skills as substitute for sign language.

Rubio, not to be outdone brought forth such a lackluster announcement that even “Mr Excitement” Tim Pawlenty was jealous of the blandness to be viewed.

Paul and Rubio’s announcements were rather pedestrian in nature compared to Cruz, but significant by all means, as the “Freshmen 3” is now fighting for the affection of the very people who placed these first term Senators in DC, the Tea Party.

I do find humor that the Conservative Media has built the “Freshmen 3” just as the Liberal Media created the aura of Obama. If there’s one thing for certain, as much as the Con-talking Media hype machine loves to slap Obama as a non-experienced freshman senator built up by the Libby Media as the next great thing, they have done the same in the “Freshman 3.” 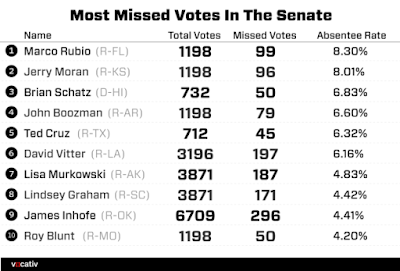 Young, energetic, well spoken, well educated, minority background, and oops, sorry Paul doesn’t fall under the last category. But most importantly just like Obama, Rubio and Cruz have the worse attendance/voting records in the Senate.

Mirror images, well that’s in the eye of the voters and words of the partisan talkers spewing fictional fact.

But it’s early and Media is happy with finding silly little nuggets of disinterest to provide the public as distraction. So pay attention to any flip-flops that will be considered “revision” per the campaigns over the ongoing months.

OK, that’s it, Slap the Political Tap, put on your $140 knock off rebranded “Rand (Ray) Ban” sunglasses and call the bank for a loan to cover your Presidential 2016 campaign bar tab. It’s gonna be a long nauseating campaign.

Woman charged with attempted murder for driving through protesters (MSN)

The primaries are too long, we need only three Super Tuesdays

Politically Brewed - March 17, 2020 0
Raise your hand if you've finally had enough of the 2020 Primaries already? Actually, let's correct the question: How many of you are tired of...