The day after Election Day is always somber as voters and candidates alike either lick their wounds or toasting the sunrise to a new day. But many are happy about the end of the wave of political ads that have consumed us these past few months.

But the tsunami of a GOP victory came with less force and was more splash then crash. 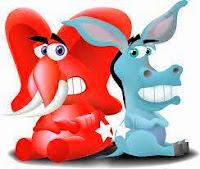 The dramatic shock and awe by Media outlets was absurd considering for the past 6 weeks we’ve been told time and time again that the GOP would extend their majority in the House and win the Senate majority by at least 5. So why all the gloating and tears by punditry? This was not a David slaying a political Goliath but more like the 3 Little Pigs as the Democratic Wolf tried to blow everything and couldn’t.

And no that’s not a mistype, I mean “blow everything” in pornographic term.

Somewhere this post election day, I can vision Karl Rove prancing around in his boxers at his mansion blaring at the highest levels LL Cool J’s “Mama Said Knock You Out http://www.youtube.com/watch?v=vimZj8HW0Kg”

Once again, I say you can’t call it a tsunami, monsoon or avalanche afterwards when this Midterm wasn’t about President Obama, nor do I believe “O’s” policies either. No the results were clear this was more about gridlock and lesser of two evils in resulted victory.

Still there are many who believe the elections is about liberty, bibles and guns over big brother, Islamic sympathy and gun bans. Oh that’s so 2008 or was that 1996? Anyway, that mantra is dusty and needs to be shredded. 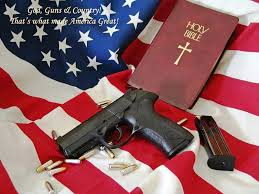 For too long now, we’ve seen Congressional gridlock, more so in the Senate then in House. So knowing the GOP only needed 5 to win in the Senate and a few more for added ease to stop the gridlock, it’s easy math to see that having one Party control Congress as a whole only leaves “O” to fail, compromise or win with Executive Order.

Sour grapes by me? Nope. Inevitable course of action by voters? Yes

Applaud the GOP for their victory, but only for a short time as the post election day money shot being had by the GOP, partisan pundits, and constituency combined ends quickly as the focus now shifts to Presidential hopefuls,wanna-be and a whole lot less has-been candidates as we saw in 2012. And there’s great reason why the 2016 Presidential Campaign leans heavily in the GOP favor. They built a great farm system.

Years past and to paraphrase a borrowed line from Syndicated radio show host Jerry Doyle, the GOP has always been “Too Right, Too White and Too Uptight.” No, I’m not knocking the GOP’s victory, it was expected as they learned their lessons over the last for elections. They took the 2006 Congressional lose and became the minority and built a youthful & diligent (but sometimes stiff) political farm system that is showing time and patience pays dividends on Election Day. While the farm system was building, the old guard took the punches and laid the ground work for a piece by piece, election cycle by election cycle win.

OK they had some help from their Tea Party counterparts. Even though some of them were retreads of the GOP vying to get back into the political game.

Paul, Ryan, Christie, Kasich, and I’ll throw in a Halley are all viable and a few of those names, mainly Sen Randall Paul really need to think about their next move. In Sen Paul’s case, he has to choose; run for Senate or run for Pres because Kentucky law only permits one campaign.

Yes, politics is all about gamesmanship and little about pawns on the board. Those pawns being the voting populace. It’s easy to watch your opponent trip and stumble as they refuse to repair a crumbling foundation.

While the GOP took time to recast, the Democrats faltered with an aging cast of characters that not even botox injections could hide the cracking on the façade.

Today is the time for the Democrats to begin their rebuild, but I fear they will stick to their game day roster and lose more then gain. 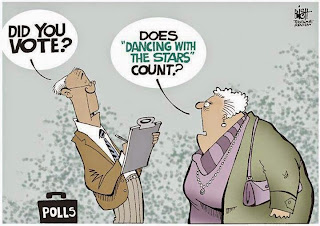 I’m talking about removing the Pelosi, Clyburn, Hoyer and Reid leadership for younger names. Youth is needed, yet the broken old warhorses refuse to take a seat and see if youth can be king again somewhere in the US. Yes, put the old to pasture and let the kids begin anew.

But the Democratic farm system is of far too small population with little known names. You can’t rebuild like that. Names like Debbie Wasserman-Shultz should be stricken from Media guides and replaced with those of Corey Booker and Julian Castro, not because of the racial demographics but because it’s their time. As I stated earlier, the GOP learned this in 2006 when they finally loosened the political reigns on Rep Paul Ryan and he ran with it. Ran strong enough to become the 2012 VP nomination and possible 2016 Presidential contender.

Even though Pelosi and Reid are the party meal tickets when it comes to gathering donations, it is however time for them to relinquish their thrones for younger talented energentic politicians. It doesn’t matter if it’s a Gay Latino with a shy bladder, as long as they work the entire base and not a demographic. Yet this is the downfall for the Dems as they only truly work the individual demographic and not the whole thing

What I really want too know is, what happened to the “anti-establishment” crowd that have taken to Social Media and the interweb over the past few years?

Obviously that was all talk with little walk as many incumbents took to the victory podium on election night. For example, how did Kentucky’s Sen. Mitch McConnell keep his seat when he had many adversaries on both sides of the aisle within his state? Check mark that win as the lesser of two evils by all accounts.

Yes, as the song goes “I been here for years” is true and the GOP seems to do best in Midterm elections and they’ve only got a year to make this work for them come 2016 if they want a punch-gut victory in Nov 2016.

So within the next year, a Majority held GOP Congress has much on its plate; Immigration reform, Tax reform, Welfare reform, reform of any program really except Obamacare. I do not see the GOP going after Obamacare for the 50th, 51st, or whatever time as many lost count.

But they have to choose their fights wisely, even though they have the Majority, they do not want to come off as drunk with power and still create gridlock within their party, which has been known to happen. Their Congressional actions can make/break a 2016 Presidential victory. It’s theirs to lose, as there truly is no one within the Democrat stable worth putting a saddle on.

That’s it, Slap your favorite politically brewed tap and remember just because the Media is peeing on your leg doesn’t you shouldn’t carry an umbrella, sometimes their aim is off.

Yes folks there are false flags – But they should be...

Politically Brewed - February 28, 2017 0
Yes folks there are false flags - But they should be taken serious until proven so Come on Daily Beast, you’re really pushing the narrative...