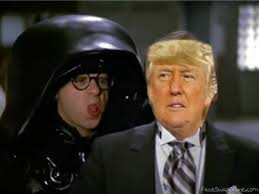 President Donald Trump said Tuesday he wants to create a military force for outer space during an address to members of the U.S. Marine Corps at Miramar Air Station in California.

Trump said he has developed a national strategy for space that recognizes it is a “warfighting domain.” He likened his proposed space force to other branches of the U.S. armed forces.

“My new national strategy for space recognizes that space is a warfighting domain, just like the land, air, and sea,” Trump said.

“We may even have a space force.”

“We have the Air Force. We will have the space force,” he added.

Trump described the space force as an idea he had that was not serious at first, until he continued thinking about it.

“I was saying it the other day because we are doing a tremendous amount of work in space. I said, ‘Maybe we need a new force. We’ll call it the space force.’ And I was not really serious and then I said, ‘What a great idea. Maybe we’ll have to do that.’”

Trump then joked that his idea could be the next big story for the “fake news” media to discuss.

“That could be the big breaking story. Look at all those people back there. Look at that,” he said, pointing to cameras in the room. “Oh, that fake news.”

“Think of that: space force, because we are spending a lot and we have a lot of private money coming in,” Trump said.

“Our service members will be vital to ensuring America continues to lead the way into the stars,” he said. “We are going to lead the way in space. We are way, way behind, and we are catching up fast, so fast that nobody even believes it.”

NPR Accuses Daily Wire Of Tricking Readers Because We’re Conservative. That’s A Lie. But NPR Is Lying To Its Own Readers (Daily Wire)