Let’s make one thing perfectly clear; the United States of America does not negotiate with terrorists. Period! Or so we’ve been told ever since Ronald Reagan campaigned on the notion in 1980 and that mantra has lived on ever since.

There are many arguments to be hatched when debating about “negotiating” with terrorists, it just depends on which side of the debate one stands. I say this because between the time of Bergdahl’s release and journo James Foley death, many people have jumped in their belief.

My stance is very simple in that yes the United States does not negotiate with terrorists by any means. No money, no weapons, no humanitarian aid. 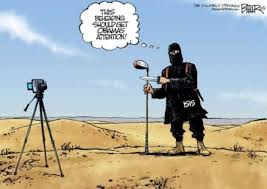 That’s a stance held by many ever since President Reagan spoke the words “The United States of America will not negotiate with terrorists” as well as uttered routinely by Poli-talkers up and down the American media landscape.

Yet something happened after the death of journo James Foley. Not sure if it was the video footage of the gruesome beheading committed by ISIS seen everywhere or if there is a pacifist wave building as many Americans, citizen and military alike, that have become fatigued with constant battle and/or terrorist images shown by many media source.

Why do I say this, well roughly 40% of those polled state that the ransom for James Foley should’ve been paid, either by the US government or his employer.

Never mind that the asking price of $132 million would’ve funded the next terrorist attack or that $132 million today for one may lead to $150 million for another.

Just the other day, ISIS began ransom demands for an American female humanitarian aid worker kidnapped over a year ago, yet the asking the ransom price for her is around $6 million.

How does one go from $132 million to $6 million in ransom? Is there a kidnapping draft listing for terrorists?

Let’s not forget that Foley’s employer, GlobalPost did attempt to negotiate with his kidnappers.

According to a International Business Times report, GlobalPost co-founder Phil Balboni stated “they (GlobalPost and the Foley family) were trying to raise around $5 million, a figure they believed could win Foley’s freedom based on the ransoms paid for the release of European hostages in the time that Foley remained captive.

They were using a cheat sheet put together by Duncan Bullivant, the CEO of Henderson Risk, who has conducted hostage negotiations in private and commercial cases, for the affordable price. It must be me because I think this is disturbing by all accounts.

“Well ya see Akbar, while he’s been a solid employee and won a few journo awards, he’s career here has been short and by equivalting this to our 4o1K plan and comparing that to the industry standard in that field of expertise, as well as government oversight we feel that ‘X’ is an affordable life price.” 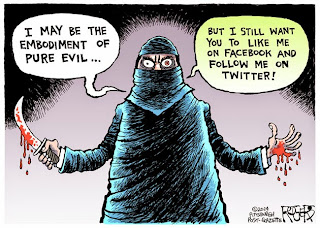 I know, yes corporations in fact have such lists to determine payouts, for many reasons of loss just as Social Security has Survivor benefits draft sheet to determine monthly payments to spouse and/or child

Please do not get me wrong, I feel sorrow for the Foley family of their loss, but I just do not understand the flip of the populace that have thumped their chest in unison of “the US does not negotiate with terrorists” as they salute Old Glory and eat apple pie under a picture of President Reagan.

Now coincidently, about 43% feel the negotiated prisoner swap for Sgt Bergdahl shouldn’t have happened. Why is the Sgt. Bergdahl situation different then Foley? Was it because Bergdahl, by all accounts, was a deserter and members of his platoon died searching for him?

I would have to say, yes, that’s judgment by the court of public opinion.

The negotiated deal for Sgt. Bergdahl, what many have called a simple POW exchange because only people were negotiated, no money and no weapons were traded. 5 terrorist detainees for 1 Sgt Bergdahl.

So here’s a question, what if ISIS had asked for person for person swap and less cash, would that have sweetened the deal to save Foley’s life?

Would opinion have swayed?

2 terrorist detainees for 1 innocent and $5 million. Does that sound reasonable?

Well per Michael Foley, James brother, that’s what he believes could’ve saved his brother. I mean no disrespect to the Foley family, however if that negotiation would have saved James Foley’s life it sets a new standard for the next ransom of an American life.

Just as many Poli-talkers stated would happened after Sgt Bergdahl’s release, the Obama Administration had set the bar for future kidnapping deals. And we’re seeing it immediately as I circle back to the American female held captive as not only are terrorists asking for $6 million, but also the release of a terrorist detainee.

But the events of Bergdahl and Foley do not end with their outcomes, nope only in the American political campaign season can death be used as advertisement.

I’m not sure if it’s today’s politician or because of 9/11, but it seems death and destruction in campaign ads has crept into the norm by the campaign strategists. Maybe I should point at President Lyndon Johnson and the famous “Daisy” ad (https://www.youtube.com/watch?v=9Id_r6pNsus) that aired only once, but when I heard about New Mexico Senate candidate Allen Weh running an interweb political ad talking about American foriegn policy with an image of Foley’s executioner, well my stomach turned.

Once again, I guess death has a price be it money or political positioning.

It’s hard to believe that countries pay these ransoms, but it’s time to take a stand and stop paying ransom of any sort to terrorists.

A year ago, at a G8 summit, all major western countries signed an accord to stop paying ransom to terrorists and only 2 of those signees (US and UK) have kept to the deal. France, Spain, Germany and Italy have found different ways of funneling money to terrorists for safe return of their citizens, which has caused further kidnapping attempts across the globe. France alone has paid roughly $50 million in the past 6 years in ransom money.

And they wonder why their citizens are still being kidnapped or attacks are happening on their soil.

That’s it, slap the political tap and pay the tab, I gotta go see “Flo the Progressive insurance lady” about a bundle deal on home/car/rv and kidnapping insurance.

© 2016 Web Design By Drift2 Web Service
wpDiscuz
0
0
Would love your thoughts, please comment.x
()
x
| Reply
MORE STORIES
Todds Posts
Politically Brewed - September 22, 2016 0
It's becoming a broken record for me.. Again I say I have no problem with one's right to freedom of speech & freedom to...